Lacutamab (IPH4102) is a first-in-class anti-KIR3DL2 humanized cytotoxicity-inducing antibody, designed for treatment of cutaneous T-cell lymphoma (CTCL), an orphan disease. This group of rare cutaneous lymphomas of T lymphocytes has a poor prognosis with few therapeutic options at advanced stages.

KIR3DL2 is an inhibitory receptor of the KIR family, expressed by approximately 65% of patients across all CTCL subtypes and expressed by up to 85% of them with certain aggressive CTCL subtypes, in particular, Sézary syndrome. It has a restricted expression on normal tissues.

Lacutamab was granted orphan drug status in the European Union and in the United States for the treatment of CTCL. In January 2019, the US Food and Drug Administration (FDA) granted Innate Pharma Fast Track designation for lacutamab for the treatment of adult patients with relapsed or refractory Sézary syndrome who have received at least two prior systemic therapies.

TELLOMAK, a global, multi-cohort, Phase II study evaluating the potential of lacutamab in different subtypes of T-cell lymphomas, has been initiated in the first half of 2019 (see clinical development).

Mechanism of action of lacutamab 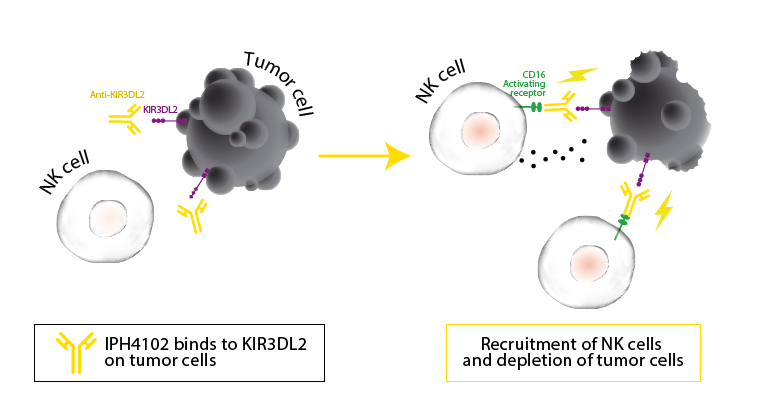 About the clinical development

The Phase II study TELLOMAK evaluating the potential of lacutamab in different subtypes of T-cell lymphomas (TCL) has been initiated in the first half of 2019.

TELLOMAK is a global, open-label, multi-cohort Phase II clinical trial conducted in the United States and Europe. In this clinical trial, lacutamab is being evaluated in patients with advanced t-cell lymphomas (TCL). TELLOMAK is expected to recruit up to 150 patients, with lacutamab evaluated:

In patients with MF, the study is designed to evaluate the benefit of lacutamab according to KIR3DL2 expression. The study comprises two cohorts in MF, testing lacutamab in KIR3DL2 expressing and non-expressing patients.  These cohorts follow a Simon 2-stage design that will terminate if treatment is considered futile. The Sézary syndrome cohort of the study could enable the registration of lacutamab in this indication.

The primary objective of this trial was to evaluate the safety and tolerability of repeated administrations of single agent lacutamab in this patient population. The secondary objectives include assessment of the drug’s antitumor activity. Clinical endpoints include global objective response rate, response duration and progression-free survival. Exploratory analyses are aimed at identifying biomarkers of clinical activity.